Austria to Sweden in one week 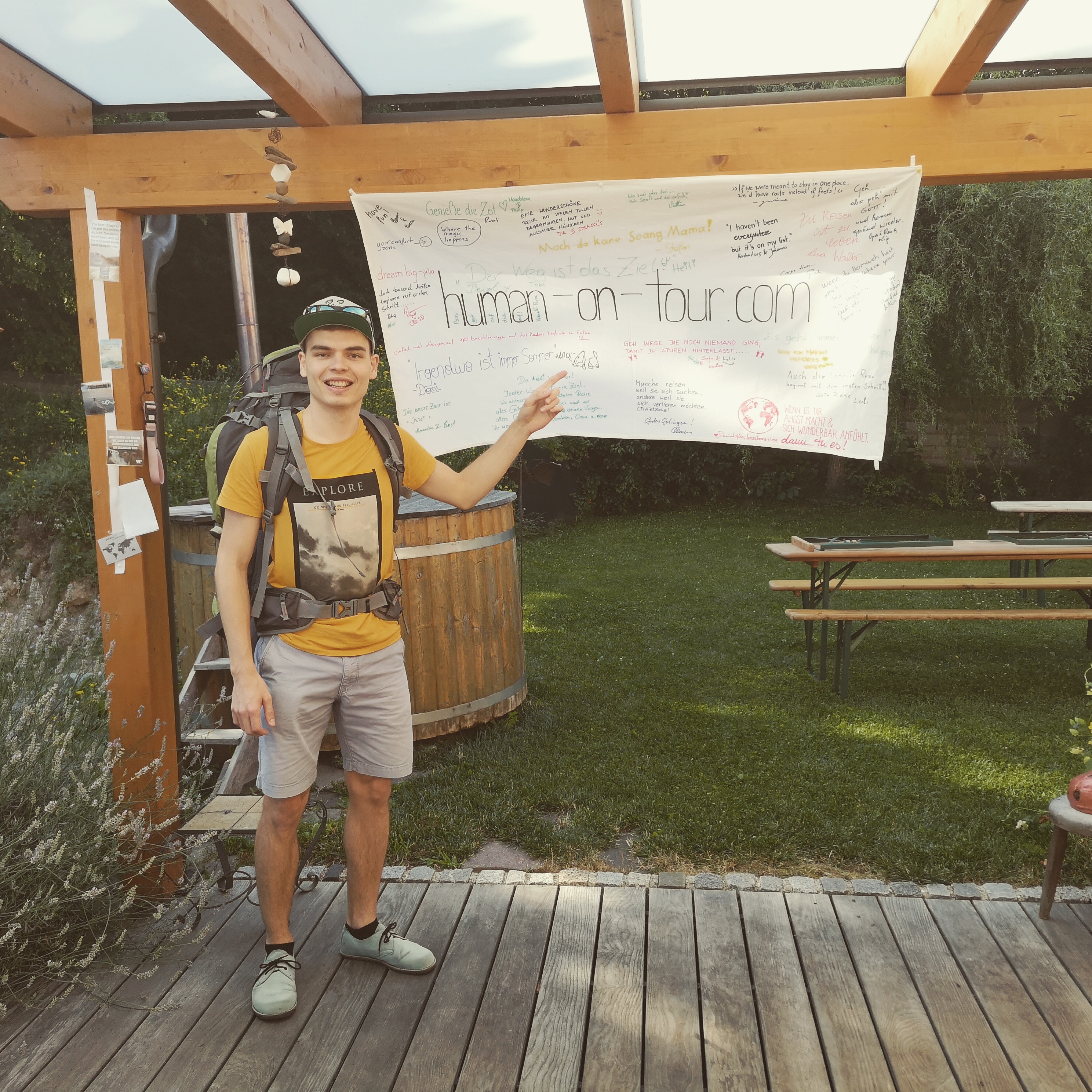 So the first week is over. It is unbelievable how fast time passes by. I’m on the road since last Monday and I had such a great time, met awesome people and made a lot of new experiences. In this post I want to share the most important moments with you.

Last Monday I woke up early. I was very excited and also a bit nervous. Me and my family had breakfast together and then suddenly my best friend Liam was standing in front of me. What a nice surprise. I said goodbye to my parents and Liam and my brother Matthäus went with me to the main street in our village where I put my finger out and tried to catch the first ride. This was the part I was most anxious about. How would that be to start my hitchhiking trip directly from my hometown. But after like five minutes, the first car stopped. It was a friend of mine, on the way to the airport where they went to Bali for honeymoon. What a perfect timing because my first destination was Vienna anyways. But not everything was easygoing. In the next city we had a car accident because another car came out of a parking lot and the driver didn’t see us coming and crashed into the side of our car. Luckily no one was hurt and after filling out the accident report we could continue our way to Vienna. What a start to the honeymoon but also for my trip. They dropped me off at a station a couple of kilometers before Vienna because I wanted to reach Linz on the first day where I was about to meet my friend Lukas. After about two hours of waiting, I found someone that took me halfway to Linz and he dropped me at Loosdorf where I grabbed some food and then I was lucky to find a young couple that took me directly to Linz. I met up with Lukas and we had some barbecue and than grabbed a beer in the city center. What a perfect first day.

The next day in the morning we drove a little bit around on the new motorbike Lukas bought about one month ago. Then he asked me if I wanted to try it as well. I never did that before but I agreed to try it. So we found a parking spot and I drove around with the first gear. It was funny and I was happy that Lukas trusted me with this. 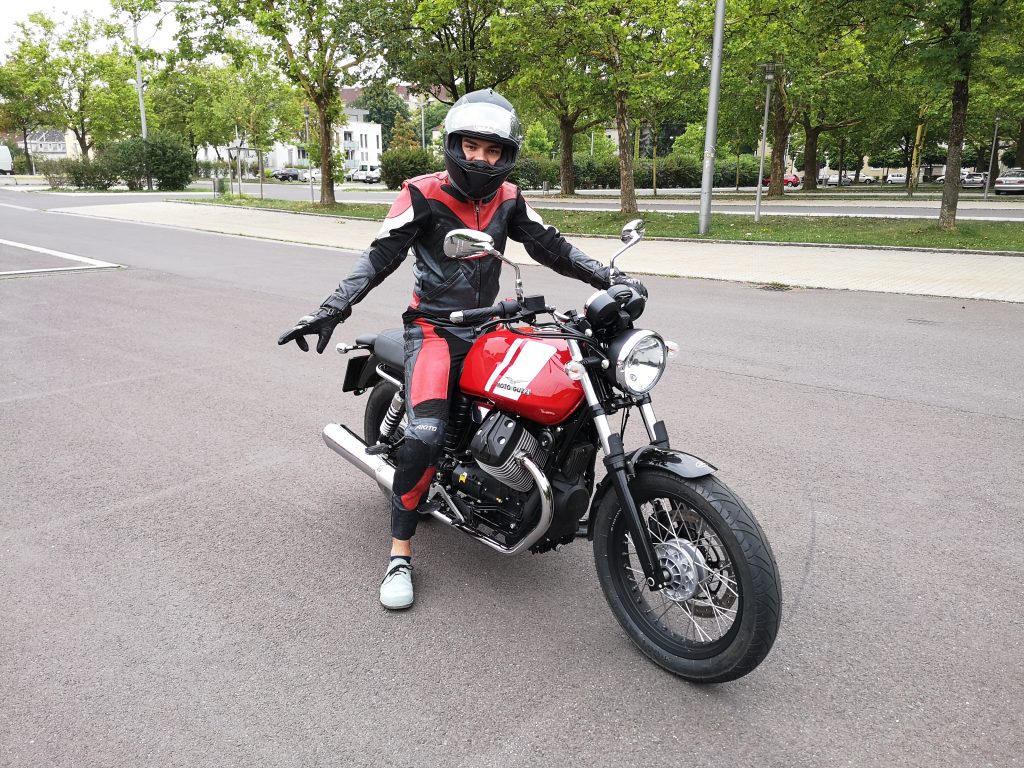 In the afternoon we met up with some friends of Lukas and drove to the Attersee where we tried to sail but it started to rain shortly after we went to the lake. So no sailing at that day. In the evening the weather got better and we had barbecue again. After that we went to a bar where we watched the football game between France and Belgium.

On Wednesday Lukas drove me and two other friends to Salzburg where he dropped me at a gas station on the highway. Thank you so much Lukas! It was an awesome start for my trip.

At first I thought that this would be a good place to hitchhike from but I was wrong. I waited for four hours. Then I found two young peaple from Germany and they where on their way back from Vienna. They took me all the way from Salzburg to Munich. They dropped me in a smaller Village a little bit after Munich because I wanted to sleep in my tent and that would’ve been difficult in the city center. The night in the tent was fine. I found a good place in the wood a little bit outside of the city. I woke up early the next day because I wanted to go as far north to Berlin as possible because I wanted to meet a friend from university there. In the evening I could hardly believe my luck. With 5 different cars, I was actually in Berlin. There was also a truck from Latvia and especially the last ride from Dresden to Berlin was amazing. It was with Lutz and he was driving through Germany because he needed to put on some Bluetooth boxes at the restaurants next to the highway. He drove 2700 kilometers in just under three days. We got along great from the beginning and especially the 80s and 90s playlist will stay in my memory longer. In the end he even brought me directly to the apartment of Sophie which is not far from the city center.

I spent two full days and three nights in Berlin. The weather was awesome so I could do a lot of sightseeing. I went to the Brandenburger Tor, Reichstag, Checkpoint Charlie, and many more.

I tried Currywurst and listened to a bunch of street musicians. On Friday I walked around alone because Sophie still had to work but on Saturday we did some sightseeing together which was nice. I liked Berlin a lot. There are so many different parts of the city and on every corner there is some kind of memorial or museum because it’s a very historic city. A big thank you to Sophie, Lea and Jonathan for hosting me. It was nice to meet you and I had a great time.

On Sunday I woke up early because I wanted to continue my trip to the north. The most difficult part was to get out of the city. A tourist guide told me to take the metro to Frohnau and try to catch a ride out of the city there. Thats what I did and after 35 minutes a woman took me to the highway driveway. There I tried to catch a ride to Hamburg. I found a guy but on the way I looked at the map and decided that it would be better to go directly to Rostock because I wanted to skip Denmark because Roxana, the friend I wanted to visit in Malmò is there just until next Saturday, so I thought it would take to long. Thats why I wanted to go to Rostock and take a ferry from there directly to Malmò. That’s why he dropped me off before the junction to Rostock. I sat there for probably half an hour and then a car from Sweden stopped. They where about to go to Puttgarden where they wanted to buy some alcohol because it is crazy expensive in Sweden. From there they where not sure if there was going to be a ferry for that day but if there was one, they would go all the way through Denmark up to Malmò on that same day. I could not believe how lucky I was. Not only was I going through Denmark, I was also going to be in freaking Malmò at the same day I left Berlin. Unbelievable. I would have never imagined that I was going to be that fast with hitchhiking but it seems that really met the right people. So a big thank you to the people reading this, that gave me a ride, no matter how far it was. You are awesome!

So we went to Puttgarden and I helped them to buy the alcohol. Then we grabbed some food and watched the Worldcup final on an I-Pad which was very nice because I thought that I was going to miss it. Then we had to wait for half an hour for the ferry but that was perfectly fine.

We drove through Denmark and I arrived at Malmò shortly after 9 pm. Roxana picked me up at the central station and she was out drinking some wine with friends so I joined them. It was an amazing day and even in the evening I could hardly believe that I really made it to Malmò in just one day. I am so lucky. And also I have amazing friends. I know Roxana just for one month (we met at the Erasmus+ project in Izmir) and now I am here and I can stay at her place.

The start was more than successful and this first week was really amazing, but it was only the first week and there is still a lot ahead of me.

Thank you for reading. I’m happy about anyone who follows me on Instagram Facebook or here on my blog.

Here are some more impressions of the first week: